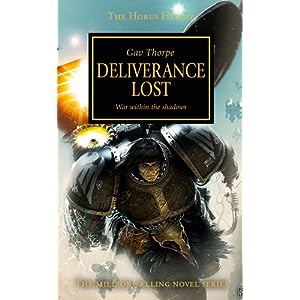 In this post, which is the 2nd part of my Primarch project series I will be sharing with you a conversion of Corax, the Primarch of the Raven Guard. The model I based this conversion from, like nearly all of my Primarch models in this series was an alternative model to represent Corax. I’m not sure who or what company originally made these although I bought a lot of mine from a Russian guy called Vladimir. A lot of these Primarch models represent Primarches quite well but after seeing the cover art for Deliverance Lost I really wanted my Corax to represent the Corax from the cover art of the book. This meant changing his jump pack and weapons.

I’ve used a jump pack from the Forgeworld Mark II Assault Squad along with the wings from a Dark Eldar Scourage model. There was only one claw I would even consider using for his right hand and that was the claw from the Forgeworld Lugft Huron model. I also wanted him to have a whip just like the cover art. It was quite tricky finding a suitable whip. All the Dark Eldar ones and fantasy ones I thought about using were way too small. I did have a whip from the Bloodthirster left over from another conversion from this series (more on that in the future) and despite being quite on the large side it does make a very impressive weapon worthy of any Primarch.

I wont be painting him up just yet. In the next post I’ll show some models that are easily available to buy that would represent a couple of Primarches very well and fit in with the scale that I’m using here.

About Bitzbox 163 Articles
Bitzbox are the UK's leading supplier for plastic and resin bits from Games Workshop and Forgeworld.
Website